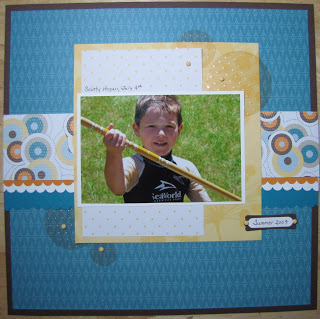 I made a goal for myself to finish six layouts a month in 2010 so I will have 72 completed layouts by the end of the year. It really isn’t a large number of layouts, but I’m already questioning my stamina! lol!
This page I actually started before I went to Leadership and couldn’t commit to taping everything down until last night. And actually, I really didn’t change all that much after having it sitting out on my table for several weeks.
Ah well, a process is a process right? I just hope I can speed up that process a bit as I only have two more weeks left of January and five more layouts to do!
On to the page… it features Matt’s godson, Scotty. I took this picture on July 4 at a party we had here at the house. It was the first event after I bought my new camera — and I think the higher quality camera definitely leads to higher quality photos! The kids had a blast playing in the pool and experimenting with our croquet game.
Anyway, I used the new Sweet Pea Designer Series Paper from Stampin’ Up and — it may be hard to see in the picture – but I also used my new Polka Dot impressions folder on some transparencies to create raised dots on the clear circles.
Well that’s all for now. Thanks for stopping by!
Share This Post:

Happy belated Mother’s Day and the winner is…..

One thought on “A Scrapbook Page!”